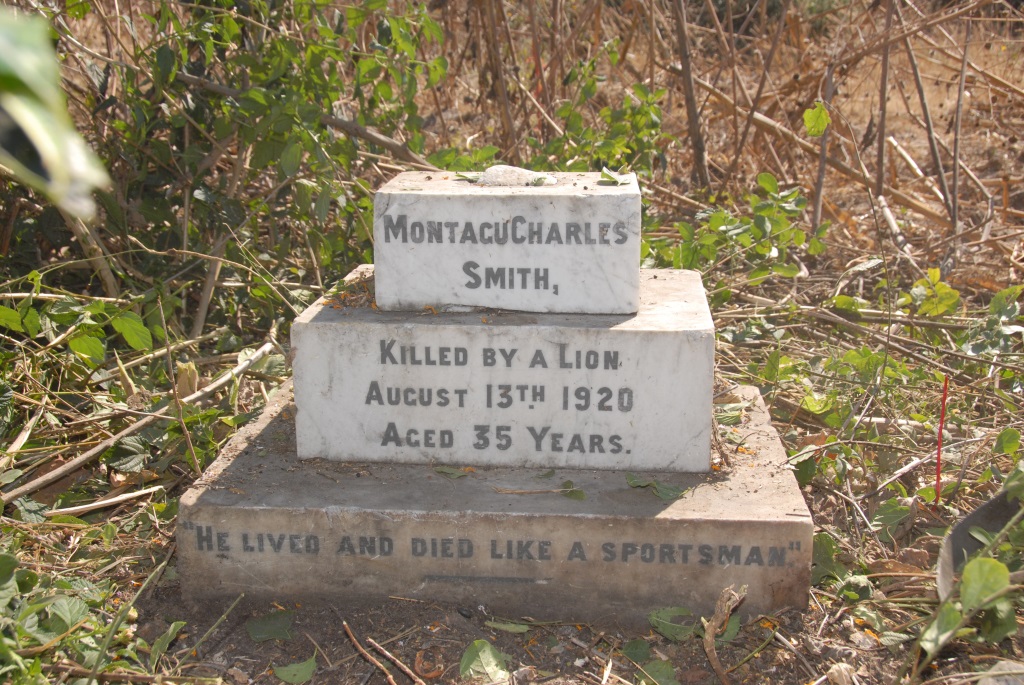 Vor kurzem fand ich sie im Buch Ibamba*) von Wynant Davis Hubbard, der von 1929 bis 1932 auf der Ibamba Ranch, 30 km von Namwala lebte. Hubbard schrieb:
Then in 1919, Lord Roundsley, looking around for a place to buy for his nephew, Montague Smith, heard of Ibamba and bought it. Smith was very happy about the idea, and decided to make something of a party of his taking over the property.
Smith gathered several of his friends, both male and female, and loaded up two trek wagons, each pulled by eighteen oxen, and set out for Ibamba.
They made quite a party of the trip, moving slowly and taking time out for hunting along the way. Then the day came when they camped not far from the big native village of Maala**), which lay only some six miles from Ibamba.
After camp was set, Smith went off with a native to shoot something for the pot. It was quite late when he returned, and he was very excited. They had run into a lion, and Smith had fired at it, wounding it, he was sure, quite badly. It being too late to go after the lion, he had come back, but he was going after it the first thing in the morning. His friends tried to dissuade him. None of them were experienced hunters, and a wounded lion can be extremely dangerous, But Smith was determined, and when his friends woke up, he was gone. What was worse, he had gone alone, without even a native to help him. His friends were frantic, and quickly rallied natives. With Smith’s former hunter to guide them, they went to the spot where he had seen and shot at the lion the evening before. They called and hollered and fired shots and tried to track him, but all to no avail, and eventually they could only return to camp to wait.
An hour went by. Everyone was getting more and more worried. The sun was well up and hot. Smith had no water with him as far as anyone knew, and he might be lost. Another half hour dragged by. Then there was a shout from the natives. Smith was coming. But as his friends leaped up to run to him, they saw that something was terribly wrong. Smith was weaving on his feet like a drunken man. He was covered with dust, and his hat was pulled far down on his head. His rifle was gone!
They rushed to him. He was covered with blood, and could barely speak. All he could mutter was „Don’t take off my hat, don’t take off my hat.“
Nobody ever found out exactly what happened that early morning out in the bush, although it was only too obvious that Smith had found his lion. He was badly bitten and clawed. His friends tried their best to cut his clothes off and sponge him and clean the wounds. During all of this Smith clung firmly to his hat with clenched hands. But it had to come off. Holes in the felt showed that the lion had bitten Smith in the head. When his friends finally got the hat off, Smith gave a sigh and died. His skull had been punctured by four large deep holes, and the bones of the head had been crushed. It was only by keeping his hat pulled tight that he had managed to make his way back to camp.