Students from Stiftsschule Einsiedeln in Zambia

Eleven 4th and 5th students from Stiftsschule Einsiedeln had the opportunity to visit Zambia for two-and-a-half weeks at the beginning of their summer holidays, accompanied by Pascal Basler, Susan Kendall and Hannes van der Weijden.

Flight and arrival in Lusaka
9th of July, Zurich airport: All of us are gathered in front of the baggage drop, just how we agreed, and it is time to say goodbye. Everything goes well and soon we’re all in our seats on the plane to Dubai. Each seat on the plane is equipped with small TV, which has everything our heart desires – from music to the newest TV series to any imaginable movie. Consequently, we arrive at Dubai airport rather tired, but there’s no time for sleep, we have to catch our connecting flight to Lusaka, Zambia! Up to that point, many of us didn’t have a clue where exactly Zambia was located on a map, and we were all really excited to spend our next two-and-a-half weeks there.
After a very warm welcome from Twitty Primary School, we are driven to our first hostel, the Gossner Mission in Lusaka. There, we already have to overcome our first obstacle – what’s for dinner? A bit later, we’re all sitting contentedly in front of our plates filled to the brim with spaghetti carbonara and are discussing our plans for the next day. 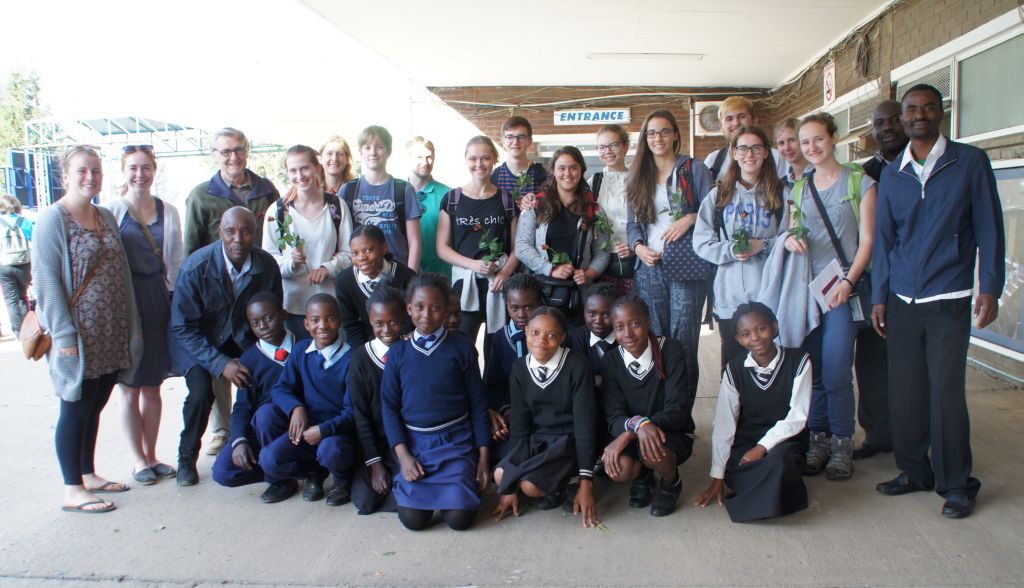 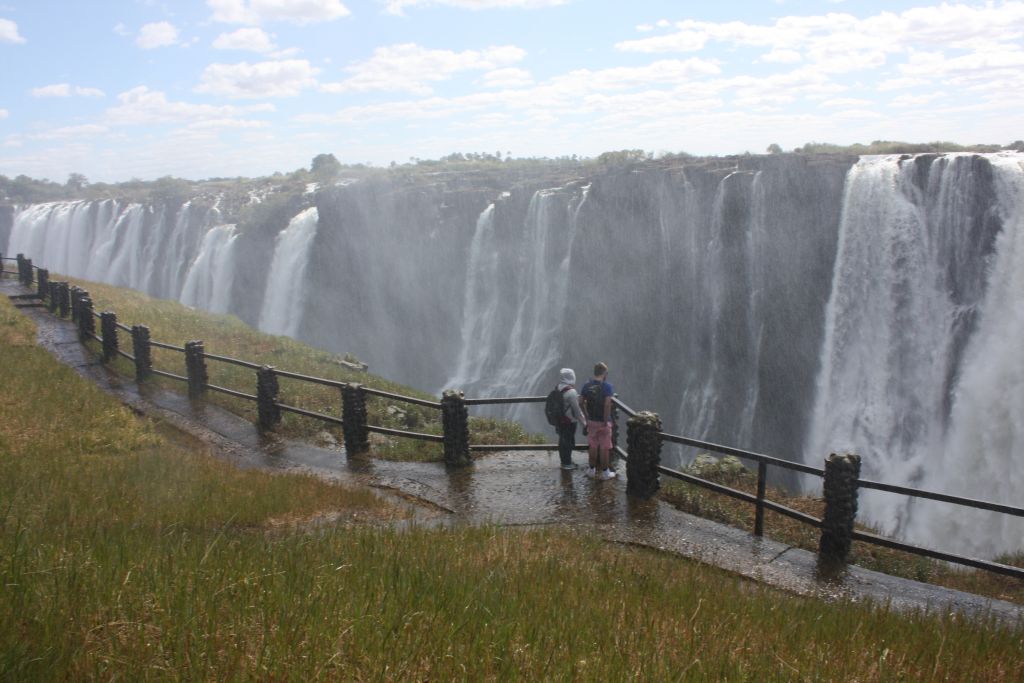 Livingstone
We have to get up rather early the next morning because it’s a long way to the south of the country, where Livingstone is located, and we had also planned a quick visit to ethnology professor Elizabeth Colson. Sadly, we later found out that she died soon after that. Our first day in Livingstone was used to exchange our dollars to kwatchas, the local currency. After that, we visited the world-famous Victoria Falls. By walking right next to them on special paths, you get an amazing view (and you get splashed, too). Pretty funny were the baboons, who are found everywhere at the Falls. The day ended with an impressive boat tour on the Zambezi river. There, we were able to see antelopes and hippos for the first time in Zambia!

Choma, Namwala und Ibwembwe
On the 13th of July, we have to get up early too. This time, we’re on our way to Namwala, with a quick stop in Choma. There, we buy breakfast essentials and rope for the luggage carrier and visit the local museum. Right next to the museum, there is a restaurant where we had the opportunity to taste traditional Zambian food. It consists of variations of „nshima“, a dish made from maize flour and water, often combined with beans and other vegetables, but also with beef, or, how we ordered it, with „kapenta“. Those are small, crunchy, salty fish. The food is traditionally eaten with the right hand, but not before washing it with a bit of soap and warm water! 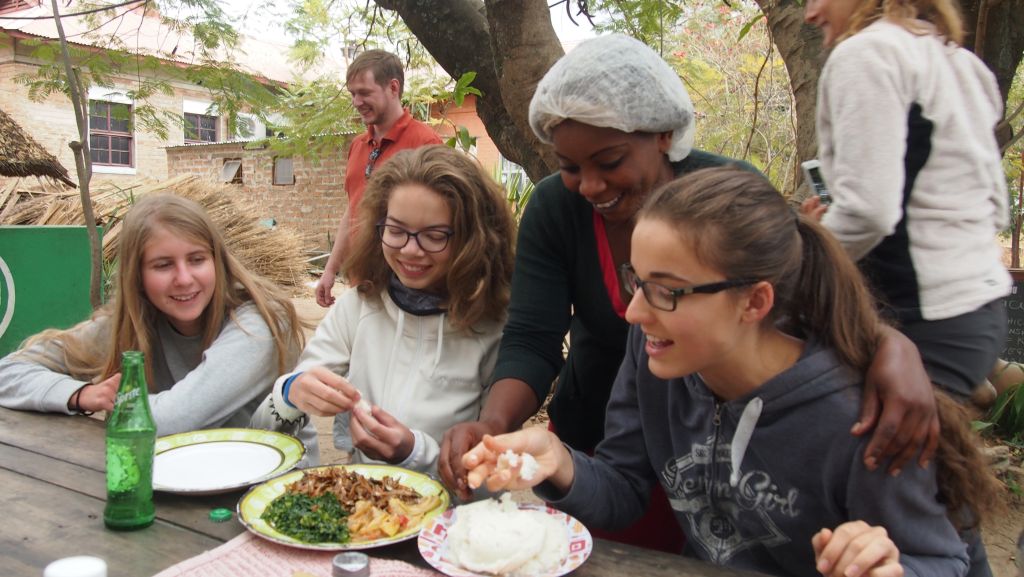 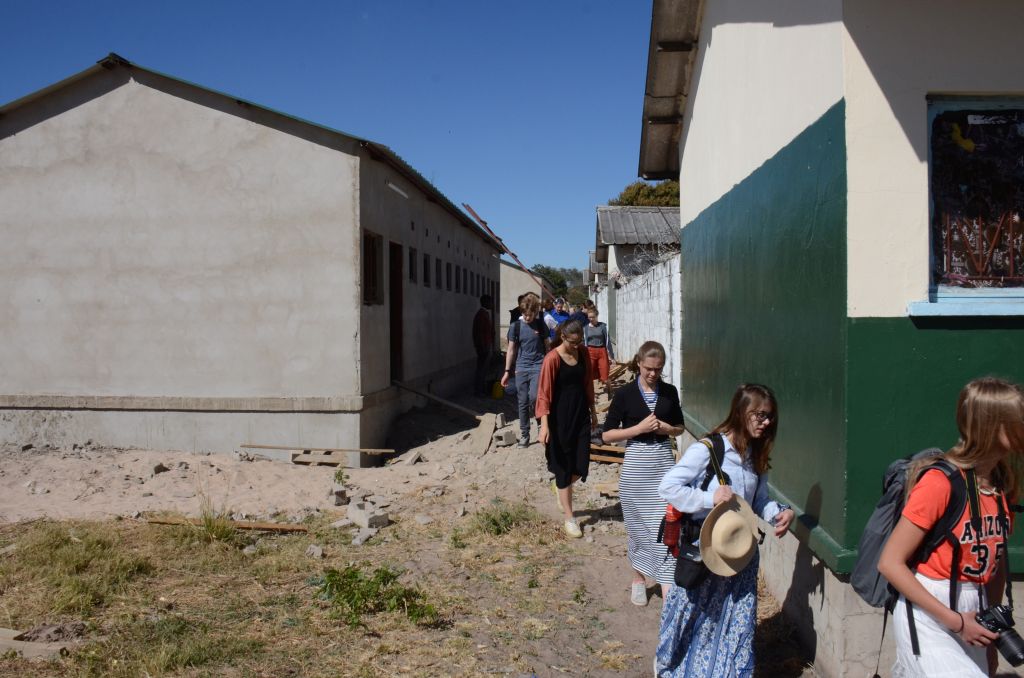 Having arrived in Namwala, we first got a tour around the Namwala Secondary School premises by principle Robinson Mulamfu, during which we also visited the lasted projects of the friends’ association – the new toilets and the water tower. In the evening, we attended a welcoming ceremony by the school, including speeches, dancing, poetry slams and songs performed by the schools Gospel choir. There was even a traditional dance! 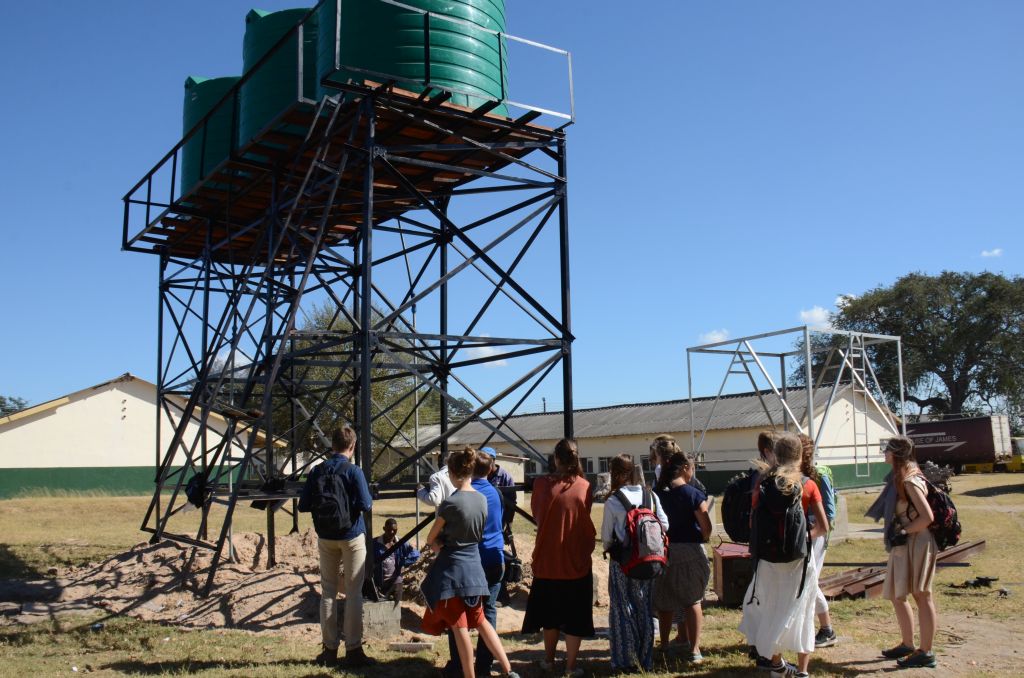 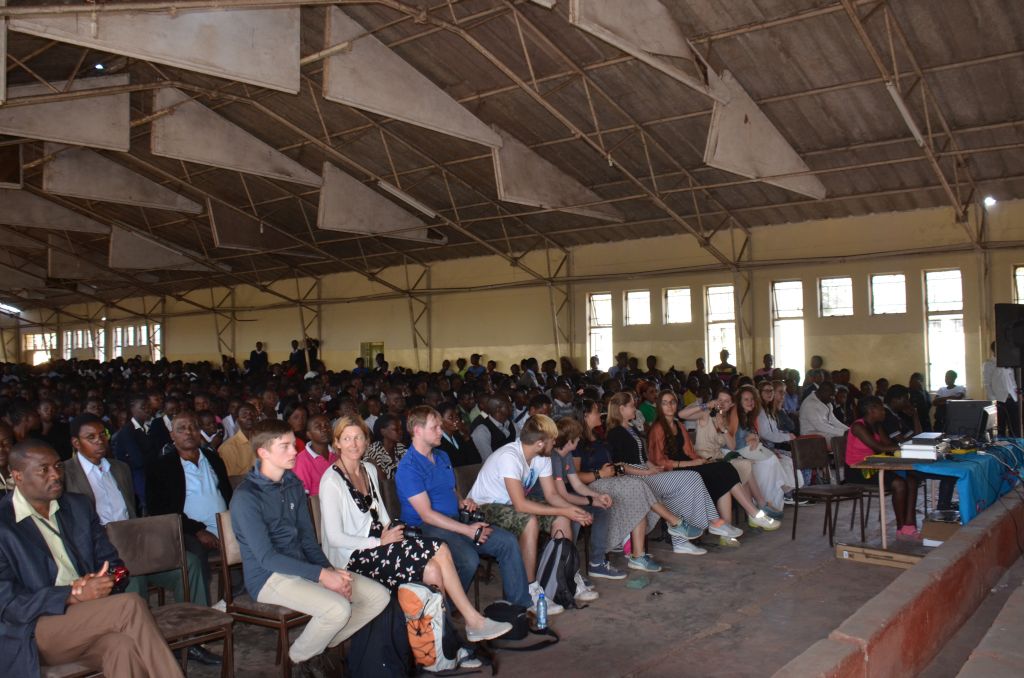 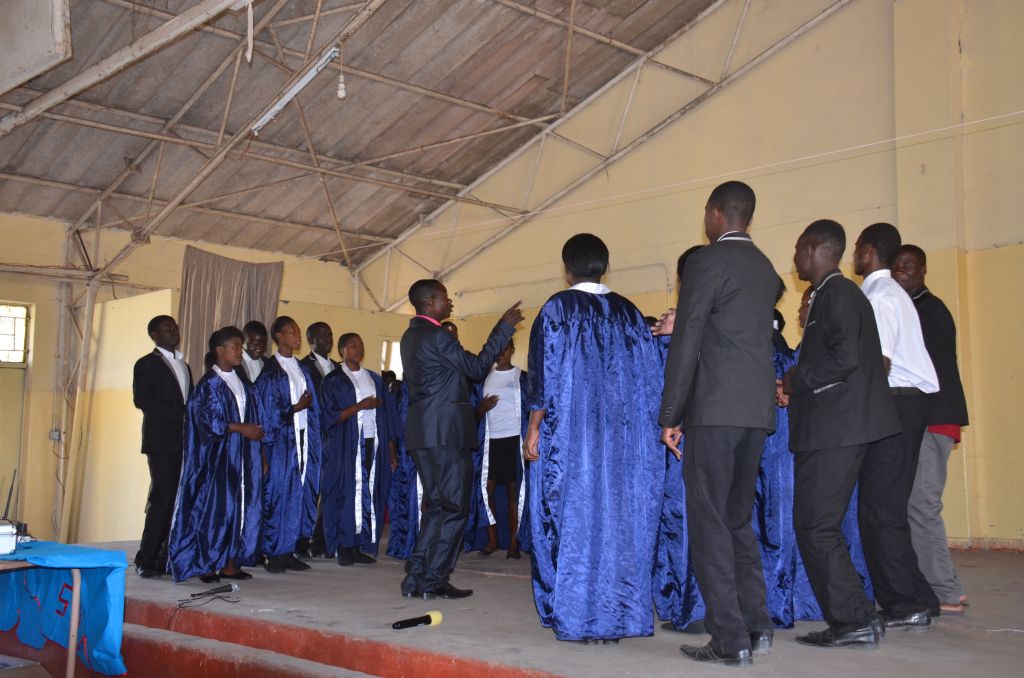 We went to bed excited that night, because we knew, the next morning we were going to have the opportunity to go to class with the Namwala students! Many of us had already met lots of them the previous day and were now anticipating to visit their newfound friends in their classrooms. After that, we visited the districts’ chief, the traditional authority in the region around Namwala, to show our respect. Chief Mukobela told us a lot about himself and Namwala, and we even got the chance to ask him a couple questions. 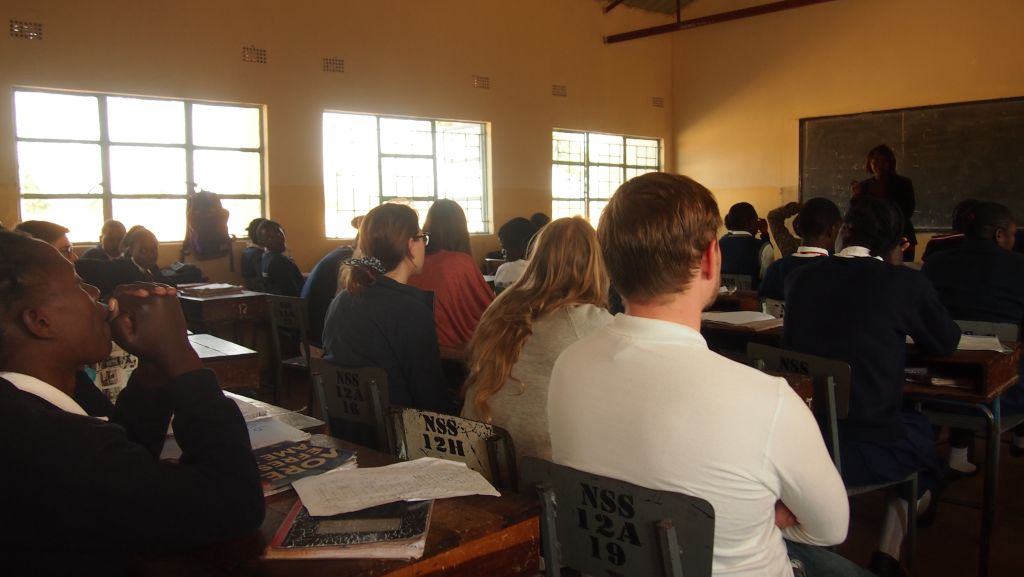 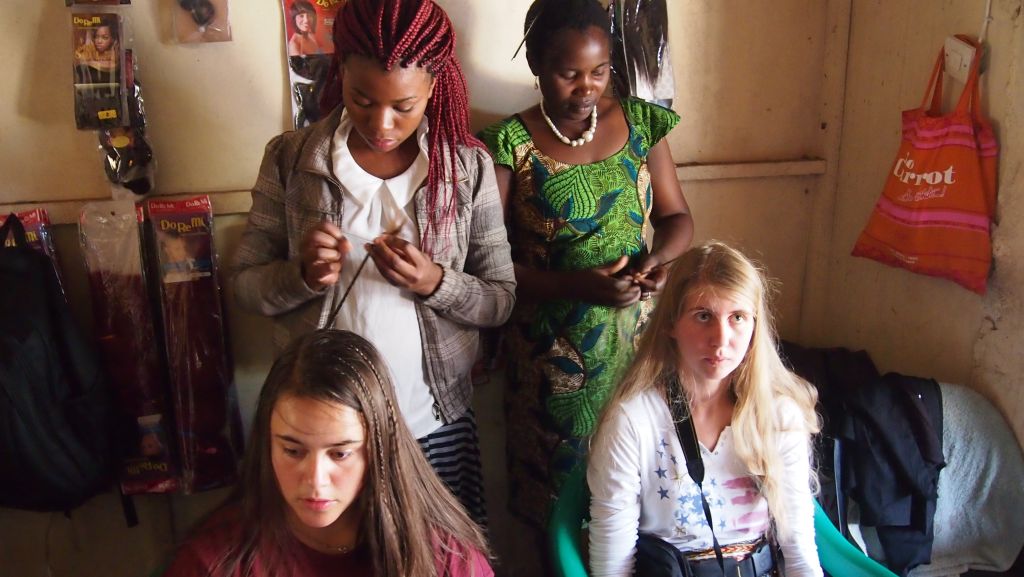 We experienced many other things in Namwala as well, like visiting the farmers’ market (where the girls in the group also got their hair braided), a traditional Tonga mass, and of course the planting of the banana trees with students from Namwala Secondary School, which was again a great way to socialize and to find out a bit more about life in Zambia. Following this, it was quite hard for us to leave Namwala and our friends at the school after six amazing days. Before we left, the school organized another ceremony for us, which again included performances by the different groups, and a celebratory meal. 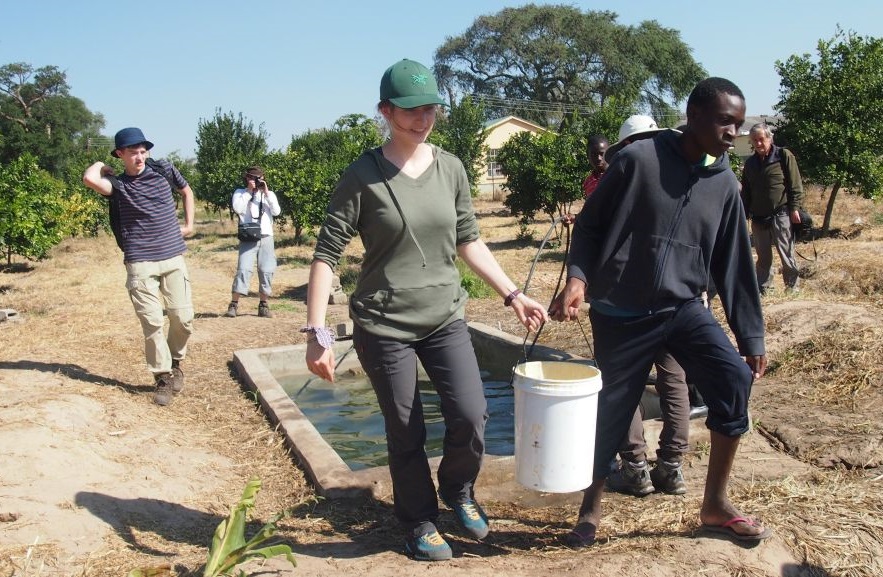 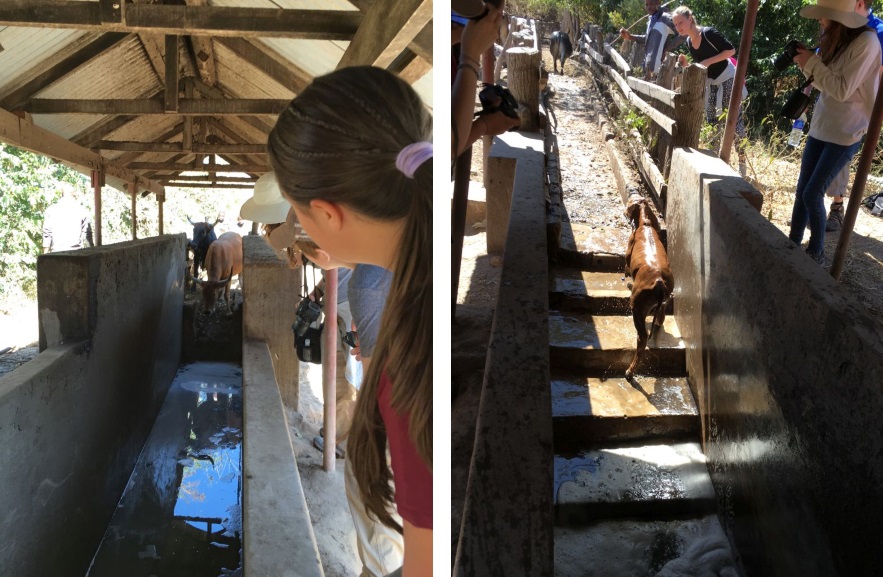 Also worth mentioning during our time in Namwala was our short trip on the 18th to Ibwembwe Ranch, owned by Moses Kondowe, who was a student of Hannes’ at Namwala Secondary School in the 70s. We had the honour to watch the traditional “dipping”, which involves the cattle being driven through a bath containing chemicals used for killing off any ticks on the fur of the animals. In Ibwembwe, we also met another Chief, Chief Shimbizi, who told us many interesting things about buffalo hunting.

Kafue National Park
Our last days in Zambia were spent driving around Kafue National Park, the biggest national park in Zambia. The first lodge we stayed at was owned by the brother of a friend of Hannes’. The owner is also very involved in Zambian politics and still serves as an adviser to the president, which is why he was the perfect person to improve our knowledge on the political system of Zambia.
The Kaingu Lodge, which we visited next, was a bit more luxurious, which we really appreciated after all this time. A “Walking Safari” was organized for us, with an aperitif on the top of one of the countless hills after. Our next station in the Kafue National Park was the camping of Mayukuyuku Lodge, which was quite an adjustment after our “luxury lodge”. Still, we all enjoyed it a lot, but the highlight was probably the camp fire. It was not only for our enjoyment, but also to scare away the wild animals, since the lodge was located right next to a river and it’s not seldom that the hippos and elephants there walk through the camp at night! We also undertook a boat tour and an “evening safari”, where we managed to see lions! 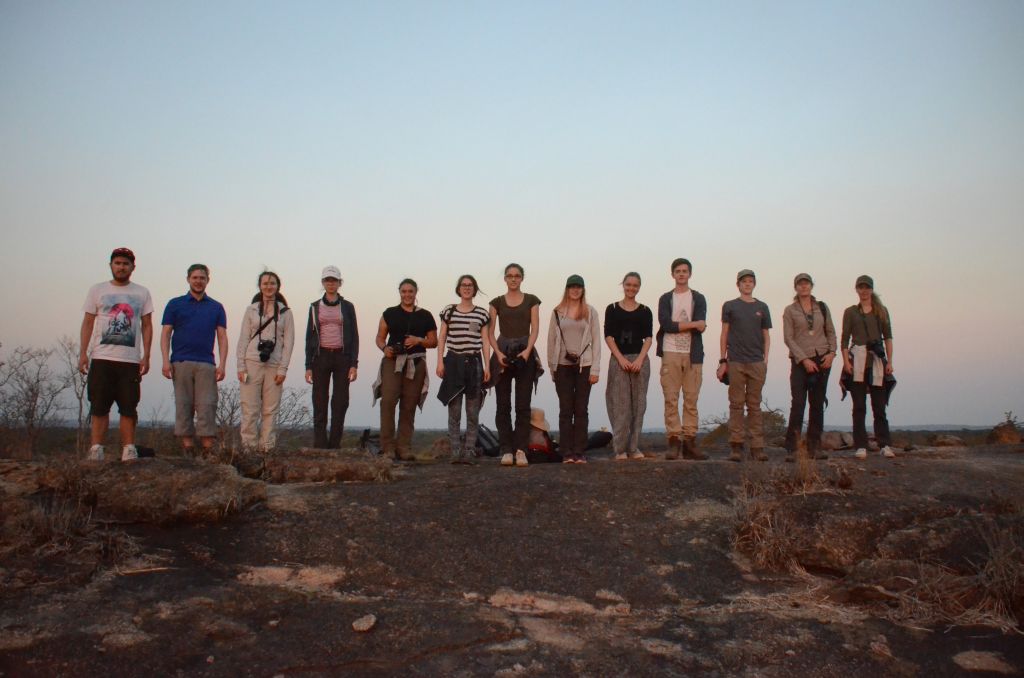 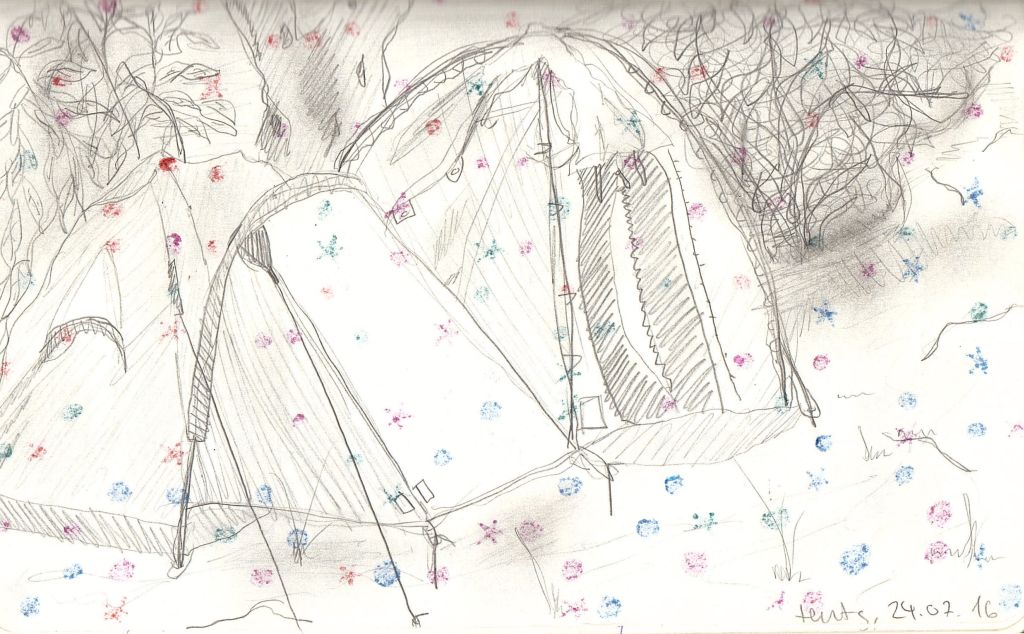 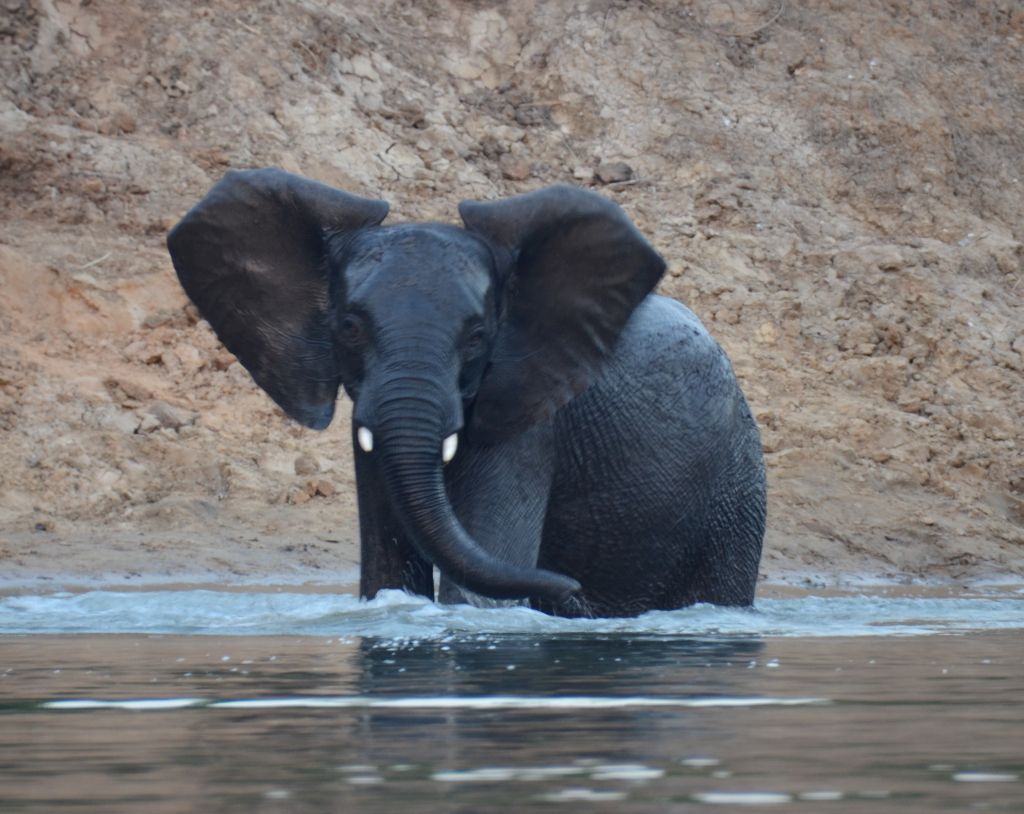 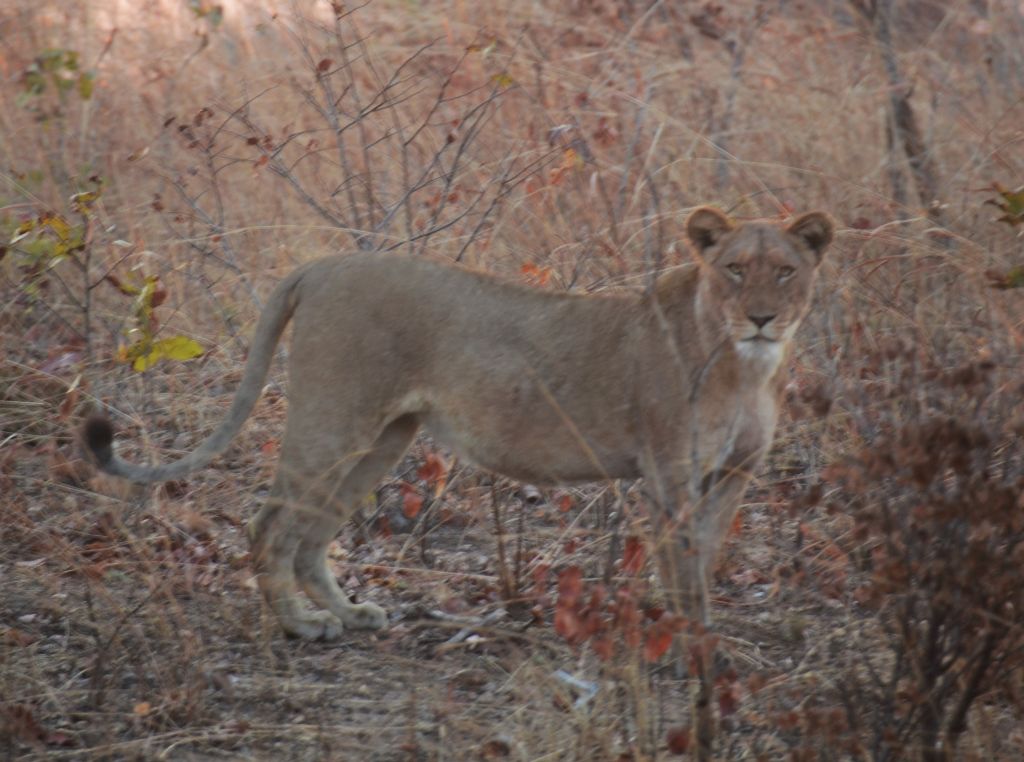 See you later, Zambia!
On the 25th, we already had to drive back to Lusaka, and with that, our adventures in Zambia were coming to an end. The next day, we visited Twitty Primary School, owned by the Maonde family, in Lusaka. Simon Maonde, who died three years ago, was the first Zambian principle of Namwala. We also paid a visit to the property of a solar panel company, and then there was the final dinner, where we, of course, had to play one final round of „Werwölflen“ with everybody!

Back at Zurich airport, we were all very sad, that those weeks in Zambia had already come to an end. For us all, it was an unforgettable experience to have been able to get to know Zambia so up close and with all its aspects. If we could have, we would have stepped on that airplane to Zambia again right away! Here, we would also say thanks to Pascal, Susan and Hannes and to everybody else who made our time in Zambia so unforgettable. See you later, Zambia!