The missionary and explorer Reverend Dr. David Livingstone travelled through southern Africa in the middle of the nineteenth century. His main aim was the battle against slavery. He is still greatly honoured in Zambia: the town Livingstone is the only place which has kept its colonial name after independence in 1964. In 1865 David Livingstone published the book «Missonary Travels and Researches in South Africa». In this book he mentions the Ilas (Baila, Mashukulompo), the indigenous people of Namwala. This is remarkable, as he also met many other communities in Southern Africa.
During my investigations into the Ila people I acquired a copy of this book from a second-hand bookshop. To my surprise it contained a cutting from a New York newspaper The Daily Witness from 1874 with the news about the death of David Livingstone in Zambia.
The information about the culture of the Baila isvery exciting but a discovery of this kind makes it even more thrilling. 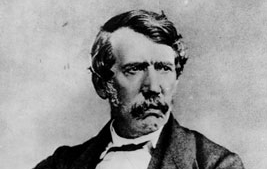 THE DEATH OF DR. LIVINGSTONE

The following dispatch has been received at the Foreign Office from Her Majesty’s Acting Consul-General at Zanzibar:

My Lord, I have the honor to acquaint your Lordship that for some weeks past rumors have been prevalent in Zanzibar, to the effect that Dr. Livingstone had died near Ujiji, and that his body had been preserved and enclosed in a box for transportation to the coast. On the 3rd Jan. these rumors were confirmed by letters received from Lieutenant V. L. Cameron, B.N., commanding the Livingstone East Coast Expedition, the latest of which was dated Unyanyembe, October 22, 1873. As these letters were forwarded under flying seal for the information of the political agent, I have been able to glean from them I the following particulars regarding the latest movements of Dr. Livingstone, and the circumstances attending his death. It appears from the information given to Lieutenant Cameron by the doctor’s servant, Ohumah, that Livingstone proceeded from Ujiji to the middle of the northern shore of Lake Bemba (Bangweolo), and that being unable to cross it, he retraced his steps and rounded it to the southward, crossing, besides the Chambeze, three other rivers which flowed into the Lake. He then went (so far as Lieutenant Cameron is able to make out) in search of the ancient fountains of Herodotus, and eventually turned to the eastward and crossed the Luapula. After marching for some days through an extremely marshy country, in which, sometimes for three hours at a time, the water stood above the waists of the travelers, the Doctor succumbed to an attack of dysentery, which carried him off after a11 illness of ten or fifteen days. During this trying journey two of his men died and several deserted. The remainder, 79 in number, disembowelled the corpse, and embalmed it, as well as they were able, with salt and brandy. On nearing Unyanyembe Chumah, with a few others, started ahead in order to procure supplies, as the party was nearly starving; and the remainder, with the body, were reported to be distant from ten to twenty days’ march from Unyanyembe at the date of Lieutenant Cameron’s letter. It will be seen, on reference to Dr. Livingstone’s last communication to your Lordship’s address, (dated 1st July, 1872) that the account given by the Doctor’s servants of his latest movements agrees in the main with the route sketched out by the traveler himself before leaving Unyanyembe. His intention was to go southwards to Ufipa, then round the south end of Tanganyika, arid crossing the Chambeze, to proceed west along the Shore of Lake Bangweolo. Being then in latitude 12 deg. south, his wish was to go straight west to the ancient fountains reported at that end of the watershed, then to turn north to the copper mines of Katanga, and after visiting the underground excavations, to proceed to the head of Lake Lincoln whence be would retire along Lake Kamolindo towards Ujiji and home. He distinctly stated that it was not his intention to return northward through the Manyuomo country and, as he estimated the duration of his journey from Ujiji and back again at eight months, it is not unreasonable to infer that the design had been completely carried out, and that Livingstone was on his homeward journey when attacked by the disease to which he fell a victim. The supposition is rendered more probable by the fact that when the Doctor left Unyanyembe he was well supplied with stores and provisions and that he is reported by his servants to have been nearly destitute at the time of his death. A letter which I received the same day, January 31 from Ja’id bin Jalim, the Arab Governor of Unyanyembe, further informed me that the death occurred at Lobisa. If this is correct, and if that this district is accurately laid down upon the maps, Dr. Livingstone must have proceeded further to the eastward than was supposed by Lieutenant Cameron, who fixes the spot where he died approximately at 10 deg. south lat. and 28 deg. east long. The messenger who brought Lieutenant Cameron’s letters reports that the road from Ujiji to the coast is now perfectly clear, and that, as Mirambo is entirely destitute of ammunition: nothing is to be feared from him or his adherents. In fact, he asserts that there is not a charge of powder in the whole country. As a mark of respect to the memory of Dr. Livingstone, the flag-staff of this Agency was kept at half-mast from sunrise to sunset on the 5th of January. This example was followed by His Highness the Sultan, by Her Majesty’s ships of war then in harbor, the “Briton” and the “Daphne” and by the consular representatives of the other foreign Powers in Zanzibar, from all of whom I received letters of condolence on the death of this eminent explorer and distinguished servant of the Queen. 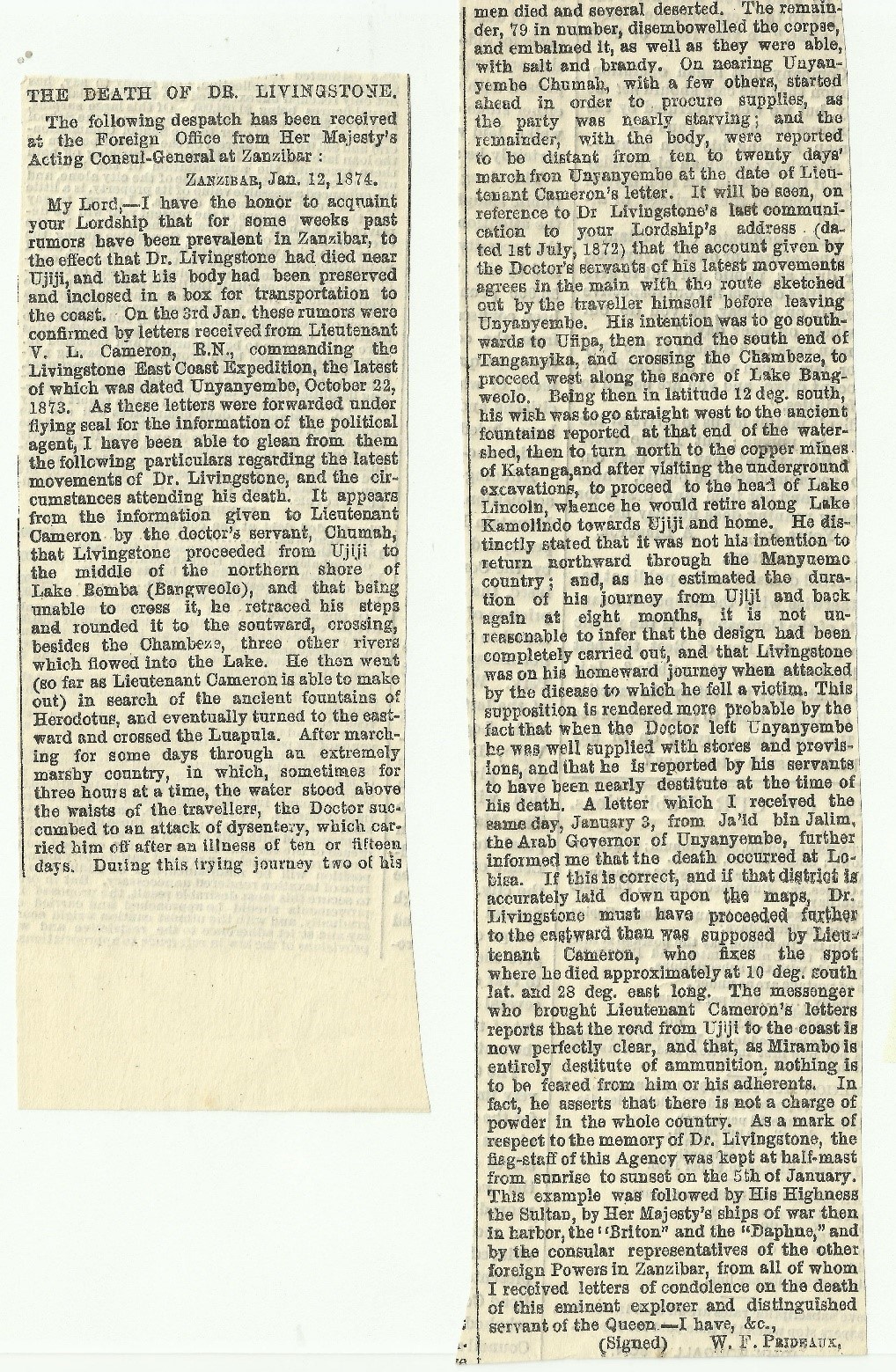 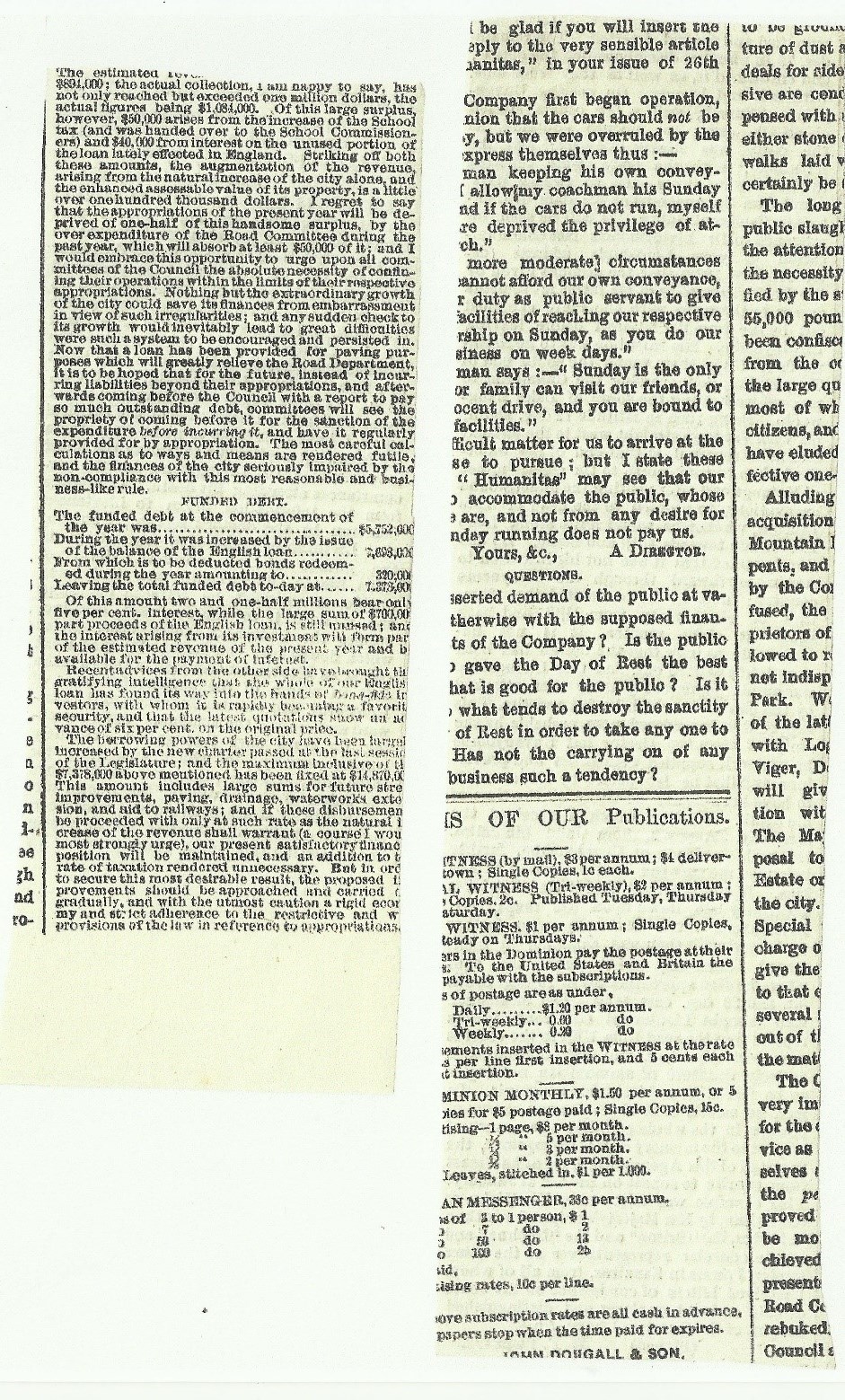