In Choma teacher Alex Kaande introduced me to Boyd, the younger brother of Chief Mungai. When I saw Boyd’s face I suddenly remembered a portrait from the book The Ila Speaking People by Edwin Smith and Andrew Dale, which showed Namushia, the son of the then Chief Mungaila. Everyone was stunned when I showed them a copy of this picture. The resemblance was not accidental, because it turned out to be Boyd’s grandfather. The surprise was even greater when Alex said that the Ila name of Boyd was Namushia. 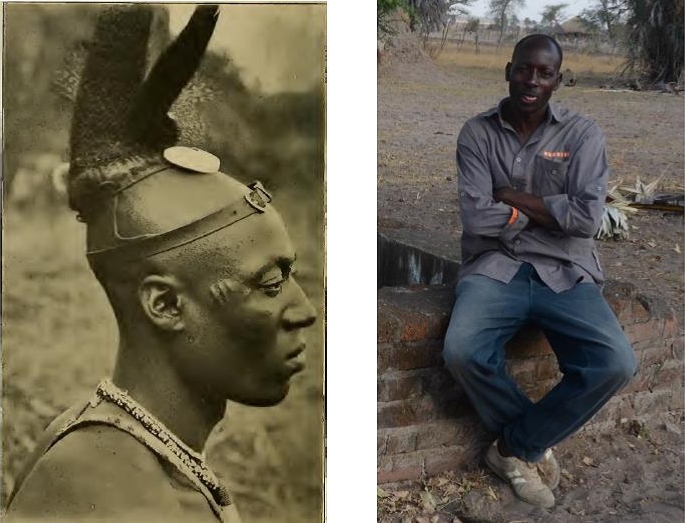 Two days after our arrival in Namwala we visited, together with Alex, Chief Mukobela in Baabwe. On television the arrival of the body of the late President Michael Sata, who died recently in a hospital in London, was shown. To my surprise I discovered on a bookshelf above the television two Swiss publications: the Shimunenga photo book and “The Culture of the Baila“.

The following day we visited Chief Mungaila in Maala and gave him a copy of the Shimunenga photo book.
The same afternoon we went searching for the remains of the Kasenga Mission, which was founded in 1909 by Edwin Smith. Apart from a few rows of trees and some stone and cement debris, we found only a dried out, brick-built well and a tombstone, where a hospital, a school with dormitories and a church used to stand.

Our last trip took us to the Ibamba Ranch, near to the Old Kasenga Mission. Andrew Dale, the co-author of the book The Ila Speaking People, was the former owner. The premises now belong, after the intensive efforts of his son Andrew Mapani Dale, to his Zambian descendants. Also Margaret Carson Hubbard and Wynant D. Hubbard, the maker of the Film Untamed Africa lived here in around 1933. Apart from a small house and a row of trees there was nothing left. A bit further on we could see the Kafue, and then I realized that I had been here before: in 2010, together with the group of pupils from the Stiftsschule Einsiedeln we witnessed the crossing of the Kafue of a big cattle herd.

The Kafue river (left); The crossing of the river by a herd (right).